The greatest gift one can receive is that of finding one’s true nature. The human spirit is resilient and can triumph over tragedy and psychological dependence. Learning to find our inner strength can conquer mental illness, alcoholism and depression. It is one factor in the complex reality of modern day suffering. It is essential to have a good physician and social support as well as the tools of mindfulness to nourish inner strength. The reality is that almost 15 million adults in North America suffer from some form of depression, enhanced through alcoholism and other mental afflictions.  I believe that the power of inner strength can help such wounded individuals overcome their worldly crutches. It took me a while to come to these realizations and the avenue was through a book I wrote some 40 years ago. This novel – Redemption – is in fact an allegory for depression and life difficulties that I once experienced, though I did not realize it at the time. The themes of mental illness and depression are writ large in this book – a turbulent Hero’s Journey to emancipation. 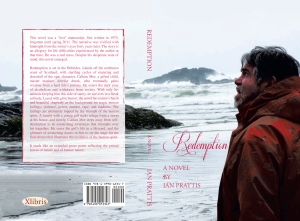 The novel illuminates startling cycles of maturing and downfall experienced by the book’s main character – Callum Mor – a gifted child, master mariner, derelict drunk, who finally gains wisdom from a hard life’s journey. His failings and misery are ultimately conquered when he saves the life of a young girl and comprehends the fragility and beauty of human existence. “Redemption” was a “lost” manuscript, first written in 1975, forgotten until spring 2011. The narrative was vivified and refined with hindsight forty years later. It reads like an extended prose poem reflecting the primal forces of nature and of human nature.  Callum Mor takes the reader on a deep Hero’s Journey. It opens with his childhood in the Hebrides. He draws wonderful mentors to him; his schoolteacher, who lights the spark of a bard in him, animal friends such as an otter, a brutal fisherman who shields his darkness from the boy as he matures. Callum Mor thrives despite the poverty of his home in an island nurturing with gentle humor and adventure.  This novel moves from the rhapsody of Callum Mor’s idyllic childhood through tragedies to the derelict zone of his alcoholic drowning out of pain and suffering. His father, a seaman longing to be at home, is driven to madness by his inability to create a place for himself on the island. His brother is murdered on the docks at Montreal. So Callum Mor stays with his mother and forgets his yearnings to be a writer. He becomes the best fisherman in the region before grave misunderstandings tear his love, Catriona, away from him. This displaces his gifts as he drives himself and his crew to the very limits of endurance. The manner of his mother’s death is the final straw.

Callum Mor’s sensitivities and mind snap, as he enters the dark zone of alcoholism and withdraws from society. With only his animals keeping him this side of sanity he survives in a bleak solitude.  Until a family with a small girl seeking refuge from a storm come to his house. Slowly he edges away from his self-destruction. He saves the girl’s life in a winter blizzard. The glimmer of awakening dawns in him while sheltering in a cave with the child warmly ensconced in a gutted carcass of a sheep he killed to keep her from freezing. He sees his life pass in front of his eyes and this sets the stage for the final drama that illuminates the resilience of the human spirit. “Redemption” is my fourteenth book and first novel, though actually the first book I ever wrote.  In 1975 I was unable to get it published.  I found this “Lost” manuscript in an old filing cabinet, read it through and could scarce believe it.  I requested my wife and a couple of friends with critical eyes to read it through, just in case I was dreaming. Modern technology enabled the yellowing typed manuscript to be transformed into a computer ready document.   My wife thought it was incredible; one friend could not put it down and mused about the film to be made; the other friend cried through most of it.  All of which encouraged me to bring “Redemption” to life. I was tempted to leave this gem from 1975 in its pristine state, but realized that my insights some forty years later could enhance the narrative and flesh out “Callum Mor” into a character of epic proportions.

The story is an allegory for the life difficulties I experienced at that time–40 years ago. The surprise for me was how could I have written such a book while in a miserable state of mind? I was not in a good place physically or mentally – with a failing marriage in the Hebrides and trying to keep a career going at Carleton University in Canada. I was not doing a good job with either. Publishing this book in 2014 was an imperative for me, as a necessary part of my own life- journey. It is a companion to Trailing Sky Six Feathers: One Man’s Journey with His Muse-also published in 2014.  These books are writing me. Available on Amazon, Barnes and Noble and Xlibris websites. Check out: http://www.ianprattis.com/Redemption.html Book video: Youtube: http://youtu.be/9ohImbVX57g Redemption Interview http://toginet.com/shows/xlibrisonair Find Recent Shows 10-19-2014